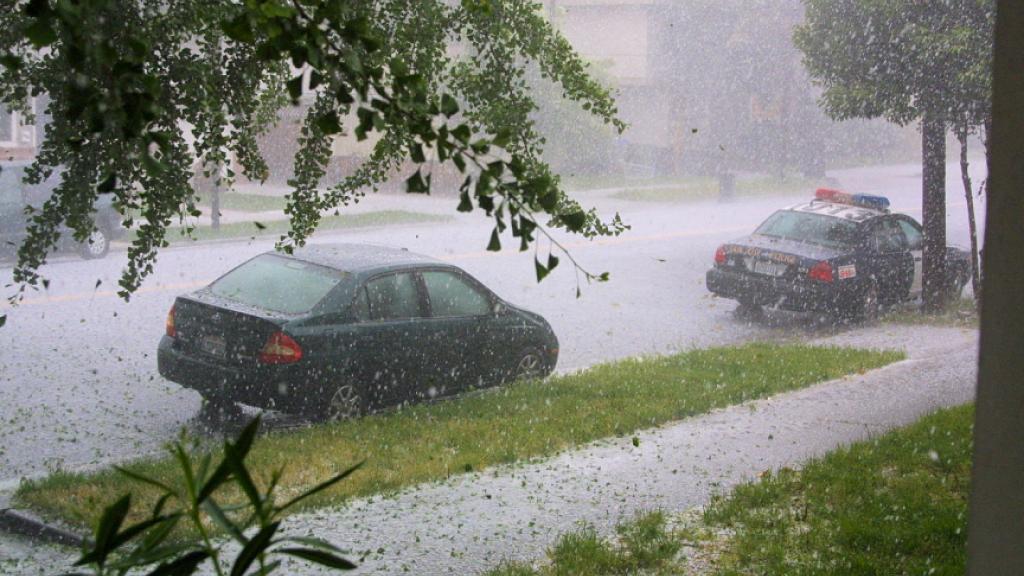 This summer, Europe and many other parts of the world has been marked by heat waves and forest fires. In the UK, the driest month of July since 1935 was recorded and forest fires have been raging close to London. Now, a significant weather change is affecting Western Europe with hail and thunderstorms in the forecast.

The situation is worrying, according to Jesús San-Miguel at the EU's forest fire data authority, as we are still in the middle of the traditionally volatile fire season.

In July for several days in a row, the temperature has reached over 30 degrees C in England and Wales, and on Sunday there was recorded a high of 34.9 degrees C / 94,8 F in Charlwood in Surrey, according to The Guardian.  July was the driest month since 1935 in England  - and parts of south-east England has experienced the driest month of July historically on record.

According to EDC, the European drought observatory, 47 percent of the EU region is experiencing  drought-like conditions and 15 percent suffers from severe water shortages.

Fires have been raging in Europe during the summer, data from the European Forest Fire Information System, EFFIS, shows that the previous record  from 2017 has been broken.

Risk of flooding
Hail showers and rainy weather is expected in the coming days in both the UK and France. The British Met Office warns of thunderstorms and heavy rain, with the risk of flooding.

SPAIN: At least eleven people have been injured, three of them seriously, on August 17, when passengers were panicking to evacuate a train in an area affected by a forest fire near Valencia, Spain.

The train, traveling from Valencia to Zaragoza, was forced to stop between two stations due to being dangerously close to one of the several forest fires raging in Spain, according to El País.

The conductor  asked the train's 48 passengers to remain on board. Some panicked, broke several windows and jumped off the train to escape. Realizing how close the fire was, they returned to the train. At least eleven people were burned and three of them were seriously injured.

Over 270,000 hectares  burned this season in Spain

The fire that which involved Wednesday's  train incident started in the town of Bejís in the Castellón province on Monday. Since then, 4,000 hectares have burned and over 2,000 people have been evacuated, several Spanish media reports.

In total, over 270,000 hectares have burned down in Spain this year, according to the state radio and television company RTVE.

In the first week of August, firefighters were struggling to control wildfires raging in the northwestern parts of Spain. In the region of Galicia, six fires were raging as the third heat wave of the summer sweeps across the country. Almost 3,000 hectares had been been burned in the region by August 6.

In the area around the town of Boiro, around 700 people were  evacuated. On several occasions,  the temperature was measured at almost 41 degrees C / 105,8 F.

Since the beginning of the year, Spain has been hit by close to 400 forest fires -  more than in any other country in Europe, according to Effis, an institution within the EU that monitors the fire situation in Europe using satellite images.

An extensive article by the BBC outlined the heat and wildfire situation, as it stood by mid July, and maps out strong data for to what the situation may be due to climate change.

According to the BBC, in Spain and Portugal, more than 1,000 deaths have been caused by the heat in mid July. A forest fire in Losacio in the north-west left one firefighter dead on Sunday July 17m  and the body of a 69-year-old shepherd was found the day after.

Temperatures in Portugal hit 47 C / 116,6 F on Thursday July 16- a record for July. Most of the country has been placed under high fire danger by the national meteorological office IPMA.

However, the heat wave moved further north with a stronger ferocity than ever previously recorded:  Germany's DWD weather service recorded a national record temperature of 41.2C in the city of Duisburg in July 2019.

The Netherlands saw one of its hottest days on record on Tuesday July 14 with 38.9C in Maastricht.

Scandinavia mostly escaped the heat dome, and only experienced temperatures approaching or exceeding 30 degrees in localised areas and in shorter spurts. However, the UK experienced some of the hottest weather ever recorded.

FRANCE: On August 5, international media reported on a new wave of extreme heat in France. Almost every part of the country is affected, and in 100 municipalities the tap water has run dry. The government is putting together a crisis management group and urging the population to be sparing with drinking water.

France is going through the worst drought ever, according to  French Prime Minister Elisabeth Borne.

The high temperatures have increased evaporation from lakes and waterways, where levels have dropped significantly at a time when  the need for irrigation is the greatest just before the autumn harvest.

36 000 evacuated from wildfires in South-West France

France has also experienced severe forest fires.  By July 20th, 36,000 people had been evacuated from their homes after the two major forest fires raging in the Gironde region of south-west France.

In the extreme heat of more than 44 degrees C / 111.2 F, and during unpredictable winds, the fires which started on July 11th, have been difficult to extinguish. On Wednesday July 20th, the French president, Emmanuel Macron, visited the region.

"We are facing one of the biggest fires in our country's history" said the president during his visit.

In late July, a 37-year-old volunteer firefighter was arrested in the Herault region after his vehicle had been seen in several locations where fires had started. The day after the arrest, the fireman admitted that, he has started several fires on May 25, July 21 and on the night between July 26 and 27, according to the AFP news agency.

If the volunteer firefighter is convicted, he risks 15 years in prison and also a fine of150 000 Euros.

Éric Florès, a commander in  the local fire brigade, called the 37-year-old's actions "unacceptable" and a "deep betrayal".

"He has ruined the work of 250,000 firefighters in France, he said to France Télévisions".

ITALY:  In the region of Umbria in the central parts of the country, the forest fire situation in July was  particularly difficult. On Sunday July 24th alone, nine fires raged simultaneously in the area, local media reported.

In several places, the extinguishing work was hampered by difficult terrain, but thanks to the efforts of water-bombing fire planes, the fires have been able to be hindered from reaching  nearby villages and towns, according to the Italian news agency ANSA.

Italy has also been severely affected by droughts and low water levels. The situation for agriculture has been described as catastrophic.

GREECE: In Greece, the fires were increasing by late July. In only three days, over 140 wildfires were reported around the country, according to a spokesperson for the Greek Fire Service.

On the island of Lesbos, a fire has consumed an area of roughly 20 square kilometers in a very short time. The evacuation orders issued over the the third weekend of July were extended on Monday July 25 to include two more villages, reports the Greek newspaper Kathimerini.

Another fire raged on the Peloponnese peninsula, near the ancient site of Olympia. On Sunday July 24, several towns in the area were evacuated, but on Monday the situation looked somewhat better.

Greece has previously asked for international help with firefighting during the summer and has been continuously been  receiving help from several European countries, as part of an emergency plan deemed necessary since the severe forest fires near Athens in 2021.

Mixed extreme weather also in the US, Pakistan, Irak and Iran

CALIFORNIA: While parts of the eastern United States have been hit by widespread rain and flooding, in July,  large wildfires were raging in the western parts of the country. In the Klamath National Park in California, the McKinney fire, which grew from one square kilometer to 160 in just one day, has been a difficult situation.

By July 30th,  when the fire intensified further, California Governor Gavin Newsom declared a State of Emergency in Siskiyou County and evacuation orders were issued in several communities, including Scott Bar, Klamath River and Horse Creek, the LA Times wrote.

Wildfires were also raging in the states of Montana and Idaho.

KENTUCKY: At least 37 people died and many are still missing in the  floods affecting the US state of Kentucky in the beginning of August.

The state's governor Andy Beshear said on August 3rd  that the death toll will probably increase  as the rescue work continues.

About 400 people so far had then been rescued from the flood water by Kentucky National Guard helicopters. However, the rescue efforts had been made more difficult by the weather conditions with continued downpours.

PAKISTAN:  More than 350 people and approximately 1,800 animals were estimated to have died by the beginning of August in the floods in Pakistan. This is normally monsoon season in Pakistan, however this year=s rainfall has been extreme.

Severe floods have also affected Bangladesh, India and the United Arab Emirates in the past month.

IRAQ: Temperatures reached more than 50 degrees C / 122 F during the first week of August, making the country one of the hottest regions on the planet. During the week, several Iraqi cities topped the list of the world's currently hottest places.

The temperature we are seeing in Iraq right now is very close to the critical limit for what humans can handle according to  from Petter Ljungman, a Swedish cardiologist and researcher in environmental medicine, to Swedish Television.

In addition to the heat, the number of severe sandstorms has also increased during the year. The extreme weather combined with the heat has also led to recurring power outages which, among other things, meant that the Iraqis could not rely on air conditioning, the BBC reports.